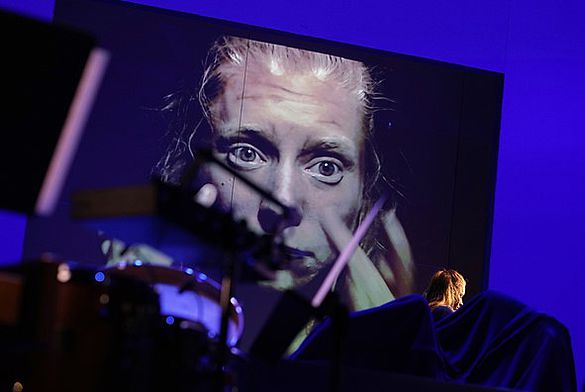 SCHÄXPIR spirit is in the air. Throughout the city you can see the SCHÄXPIR face looking at us over the edge of the glasses, there is busy festival atmosphere in and around the festival centre in the OÖ Kulturquartier and at the many festival locations.

Last night, June 24, the grand opening was a pure midsummer night’s dream (without getting lost in the matrix) at Kammerspiele of Landestheater Linz – filled with enthusiastic joy about the upcoming festival week.

Host Marcel Mohab landed on stage in an astronaut suit, the enchanting Viennese choir „Schmusechor“ greeted performing the song “Ground Control to Major Tom”. In the spirit of the motto “Multiverse. It is all real.” artistic directors Sara Ostertag and Julia Ransmayr presented a Multifest, rather than a manifest: ten theses for the opening of the anniversary edition. Festival director Cornelia Lehner thanked all those who have shaped and continue to shape SCHÄXPIR in an ongoing process. Governor Thomas Stelzer officially opened the festival by setting the right coordinates for the journey into the multiverse.

The opening piece Homo Deus Frankenstein by makemake productions, Kopergietery and I Solisti about the life story of a robot wowed the audience from the very first moment. Directed by Sara Ostertag and Johan De Smet, this coproduction by SCHÄXPIR and KLARAFESTIVAL Brussels is the heart of this year’s focus on Flemish productions.

Photos of the opening can be found here.

Talking about photos: check out the photo galleries of our festival photographers Reinhard Winkler and Florian Voggeneder (photo.vog). They will be updated regularly throughout the festival.