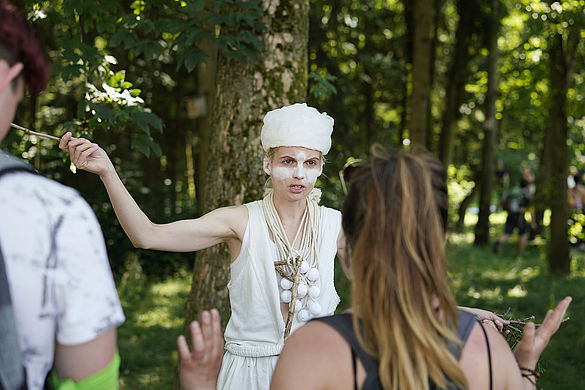 Theatre can happen anywhere and anytime – without limits or boarders between stage and audience. It’s that participative spirit that SCHÄXPIR is all about – putting spectators right in the middle of the action for an immersive experience.

Das Space Maze Game is a wonderfully charming and fun interactive theatre game. The audience is carried off into a strange, new world where old laws no longer have an effect and the social order of values must be re-defined for the coming generation.

Nestervals: A Midsommer Night’s Matrix is an analog real-life computer game, in which four young people flee from a rigid set of rules and find themselves in the opening sequence of Shakespeare’s famous Midsummer Night’s Dream. But the system and the artificial intelligence behind it have other plans.

Unter Opfern. Realitätstheater zum Mitreden is a unique play to have a say in. It shows a world divided into winners and losers, in the wake of perpetually being against each other.

Let’s get out of the comfort zone and dive into the storyline!
We all are SCHÄXPIR!